Owner mode - Create an owner, or be an active owner it is up to you. You can change all your prices freely, hire and fire coaches freely.
Funds go towards your bonus for players contracts so don't overspend, Everything else is the same as coach mode
9 minute quarters

Afterthought because of the number of new members. All members will need to confirm (get approval) with commissioners before they relocate.  We don't want to end up with a league half full of fake teams and people have left, if people leave the Mexico Diablos are a lot harder to find a coach for than the LA Chargers. Not every team has the option to move anyway as you have to pass certain requirements, but once we hit season 2, the people who have completed a full season playing games you will have the freedom to move

Fixtures - Post in the fixtures thread and arrange your game before the week is live. The is multiple ways you can contact your opponent, discord, WhatsApp, tapatalk, so for speed you can arrange your next game on any of these apps, but if you have not posted on the site the game status you will be placed on AP, so my suggestion would be always make first contact via the site. If you do arrange the game via another platform simply post in the fixtures thread the game will be played on whenever it is arranged for. Please could everyone do this, this is the most annoying part of being a commissioner, chasing people to arrange their games. If you do not post in the thread 2 weeks running and need to be placed on AP (without being on holiday etc) you will be removed from the league.

Cpu Games -There will be no computer games, games V the CPU will be simmed, a force win will be awarded to the person who needs it, so if someone didn't post in the fixtures, is on holiday or made no real effort to play the game. Playing the CPU is frustrating for most and stat-padding for others, no more losing to the CPU when it was your opponent who couldn't be bothered to arrange the game, no more winning player of the week with 100+ yard games v the CPU and no more 'it crashed so I needed the second start'. You will be given a force win and injuries will be turned off for the simmed games. If you wish to play the CPU for some practice you are free to do so as long as you don't save the result.

Playbooks - you can use any teams playbook, no custom books and you must show your playbook to your opponent and on the stream before the game starts. So do not start a game until your opponent has shown you their book.

Contracts - Max 3 year deals (unless the player asks for more than 3 before negotiations, send proof to commissioner). With owner mode you will need to keep an eye on your funds, funds are for your bonus for players, this will make it harder to resign your stars if you give every tom duck and harry a 3-year deal, so give your players realistic contracts and you will be fine.

Streaming - Apart from pre-season games all players in the league are required to stream 8 regular games per season.  To manage this, it will be the away teams responsibility to stream. If the home team wants to stream for the other person they can, but if the game is not streamed that responsibility will fall on the away teams shoulders. Streaming isn't just about having 10 viewers, it is about making sure league rules were followed, if someone feels aggrieved or is unsure of something that happened in the game then the proof is there. Almost everyone should have a stable connection in this century, I want everyone to try then if they do have a bad connection they can be added to the list and the proof is there. It has been the same people streaming games over the past few years and it is unfair on the people to carry the burden and put their play out there for others to study for 16 games. If people don't mind streaming all their games then that is great, but it will be monitored if a game is not streamed/archived and there has been no communication with commissioners.

Mercy/Respect rule - You can no longer win by more than 30 points. You don't have to run down the middle every play and make it boring for both parties. You can still play your name game, try new plays, try new players and help your opponent learn more by playing your best game without scoring the points.

Weekly transactions - Position changes, trades (excluding a few see the trades rule), number changes, free-agent pickups. Now you no longer have to post them all to the site, there will be a weekly transactions round-up blog that sums up all that so you don't have to worry about breaking any rules by not posting, but all changes will still be checked and logged by commish in the weekly blog.

Trading - Only trades for 1st round picks and players with 'superstar ability - Xfactor' need approving. I want to encourage more people to trade and not having to wait for the approval and post things, links etc will hopefully encourage more. Trades will be included in the weekly round-up and if there are any that are one-sided they will have to reverse the trade, but you are mainly experienced madden players and very rarely has a trade not been allowed that didn't involve a star or a 1st.

Should you have a trade that needs approving involving the above. On Madden put the trade on the screen like below. You can post this on the site when you post for the trade to be approved, or you can send it to me on discord. 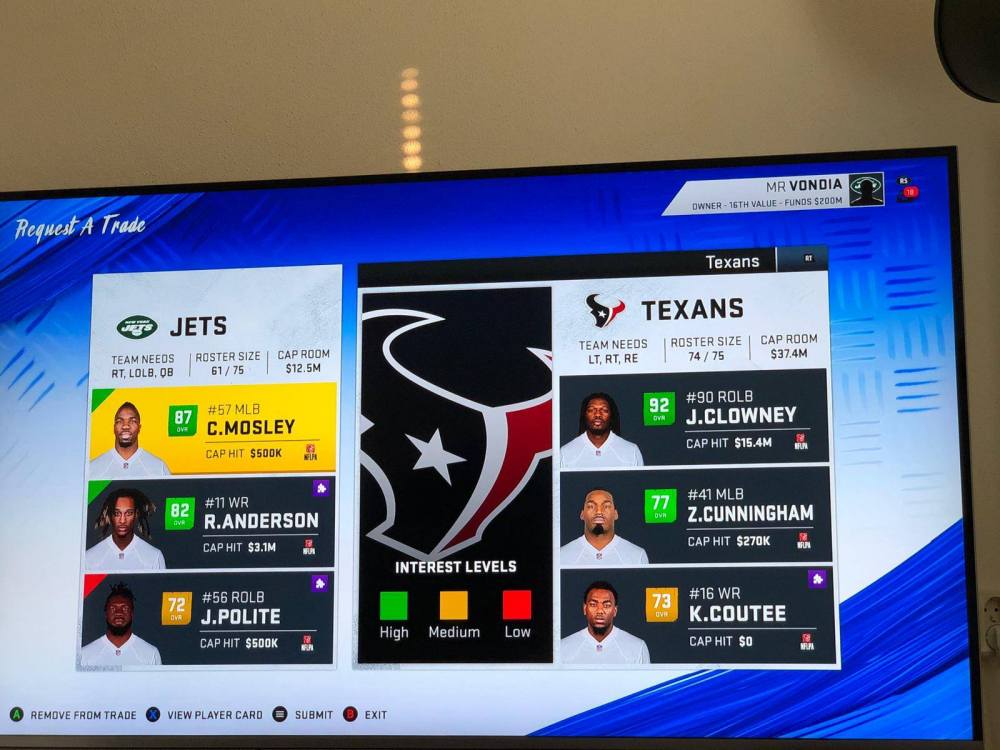 Gameplay - Now I know the word sim is difficult to judge, due to real-life NFL teams like the rams using 3 wr 1 te 1 RB EVERY PLAY, that's not mixing it up! However, this is a game, so mix up your formations, plays, run/pass ratio and do not use any exploits you see on youtube. If you have any issues with how your opponent played, tell the commissioners, tell us the issue and what happened even if it was one of us! We all want a league we enjoy, not playing the same blitzes and pa crossers you do on MUT, so your opponent will also likely want to remove any bad doing from their game. Every game will be streamed and archived to deal with any playstyle issues.

Tapatalk app - Recommended that people download the tapatalk app, its the 21st century, everyone has a mobile, everyone checks it 30 times a day. Tapatalk is the website on an app, it has a chat room (that you can mute) but every time you are tagged or DM'd on the site it sends you a notification. Everyone has time restrictions due to their job, some people more than others, but everyone, I'd imagine will check their phone at least 6/7 times a day. This is a community and we rely on each other being active, so make sure you respect each other by answering messages and being active. If you are not active, you are more hassle than a CPU team, so will be replaced even if that means a CPU team is taking yours. It is really quick, simple and clean to use, there are no loading times or sending you to the actual forum, everything is on the app and it will keep you updated so you don't miss anything.

It's a lot to read but it's really not a lot to remember and follow, I know some people get emotional during games and like a rant, but try keep everything smooth and private when discussing each other play style, if you have a serious issue take clips tell commissioners, we can check the archive, everyone I imagine joins leagues to have a real NFL feel so maybe the other person does not know they are doing wrong. Things can still be added to this if I missed anything or anyone has a suggestion but I don't like to be loaded with chores and rules just want everyone to enjoy playing the game.