Welcome to The Oil Spill – dedicated to the returning Houston Oilers – and all that leaks from the pipeline, anywhere from Philadelphia to Houston.

The league appears to be in a chaotic state, with several  @PFL Coach franchises rumoured to be considering moves that will boost their income, and attract new fan bases, and there was widespread celebration around Houston, when the return of the Houston Oilers – especially among those football fans in their 30s and older.

So, lets have a look at what Houston is getting with a franchise that toiled to a 4-12 record in the 2019 season. 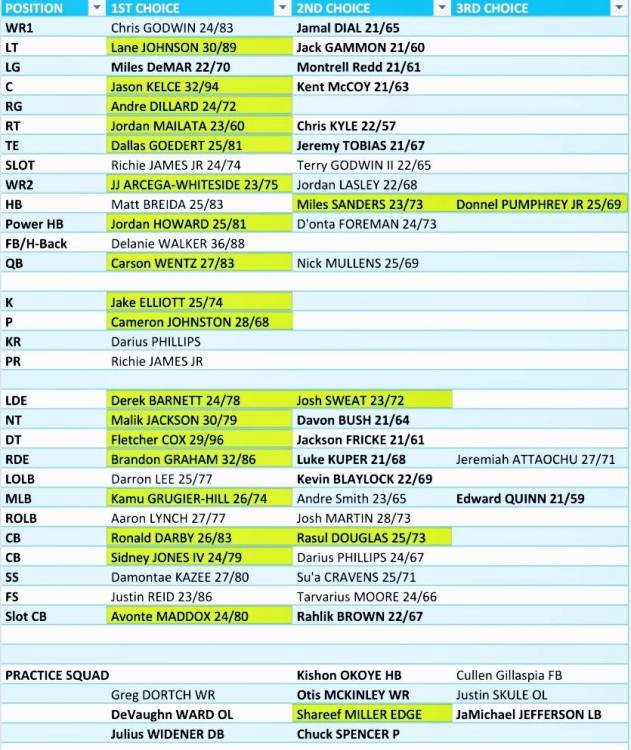 Above is the current depth chart, as the team commence their final season in Philadelphia. With those highlighted in green being the players that were on the roster when Hall of Fame WR, Terrell Owens completed his takeover last Summer, and those in BOLD being rookies this year – whether drafted or an undrafted free agent.

Despite the post draft addition of experienced move TE or H-Back, Delanie Walker, this is still a very young roster, with 13 rookies

The fact that only 22 players remain on the 53 from a year ago suggests that there may be further changes before the team make the move to Houston. The Head Coach is adamant things will settle down now, but T.O. rarely saw eye to eye with Head Coaches as a player,  so will he be in agreement as an Owner, and if they struggle again this year, will they reach the new home with a new Head Coach along for the ride?

Not much has leaked from the players at this early stage, but there are suggestions that embattled star QB, Carson Wentz, doesn’t fancy the idea of taking his fair complexion to the Southern US🥵. And given his struggles since signing his new deal, the team may be looking to the future there as well. Nick Mullens has been far from perfect in pre-season, but has shown far more willingness to take things on than his much higher paid colleague.

The new WR corps is largely unproven, but the trio of Godwin, Arcega-Whiteside and rookie, Jamal Dial have been very promising in pre season. Like Godwin and  RB, Miles Sanders, Dial is from Penn State, and he stunned those watching with a 200 yard, 4 TD return, in week 2 of pre-season.

There are a lot of new young faces battling for a position on offensive line, led by their surprising 1st round selection from Wisconsin, Miles DeMar, and the RB corps shows a good blend of speed and power, if the o-line can create the holes for them. Assisting them will be another impressive rookie, Jeremy Tobias, a TE out of Boston College, as well as the veteran addition of Delanie Walker.

On defense, the LB corps has seen a huge overhaul, and while there have been positive reports about their blend in pre-season, they’ll be hoping those on an experienced front 4 create pressure for their benefit. There is hope that rookie EDGE rusher, Luke Kuper, can take some of the load off of Fletcher Cox when it comes to pressuring the opposing QBs.

They may still play in Philadelphia for 1 more year, but they can be assured that everything they do will be scrutinised by many in Houston, as the countdown begins to their move in 2021.